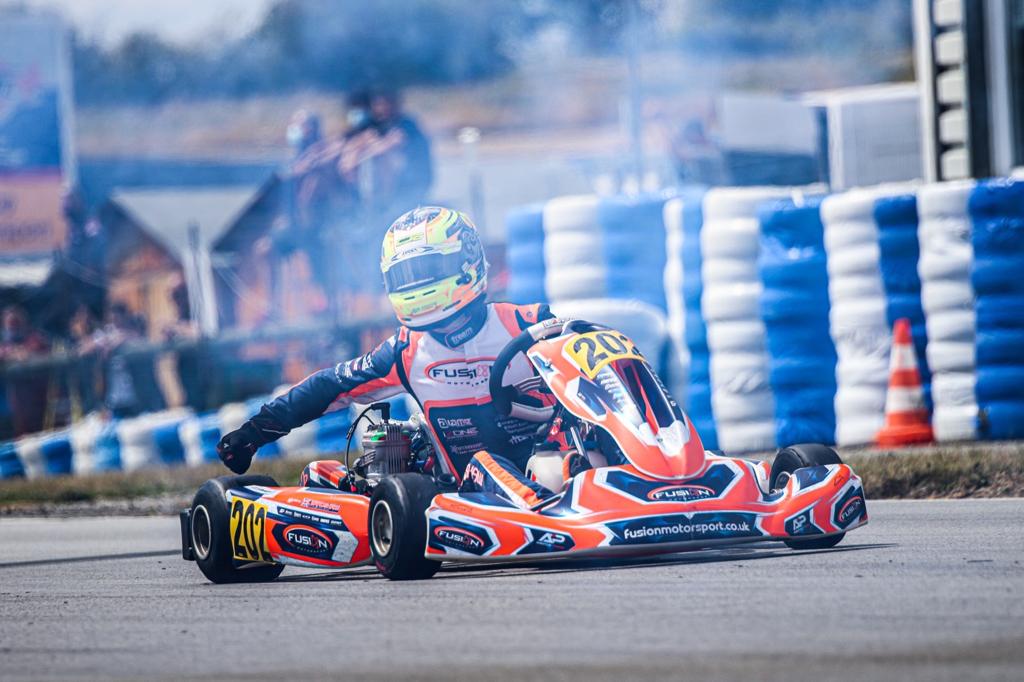 The opening round of the IAME Euro Series couldn’t have gone any better for Callum Bradshaw, who heads two round two unbeaten in X30 Senior. From qualifying on pole position on Friday to a lights to flag win in the final on Sunday afternoon, Callum would lead every lap of every race leaving the rest of the field no option but to applaud a performance that will go down in history. To be able to achieve such a result in a grid of 49 of the World’s best drivers in just his third race of 2020 is something only a select number of drivers are able to do.

Callum has fond memories of the Essay circuit in France. It was where he began his journey to winning the FIA Karting Academy Trophy in 2016, a perfect weekend that saw Callum leave France with one hand on the title. Now four years later and he was hoping to repeat history, albeit in the IAME Euro Series.

After an unfortunate end to Winter Cup back in February Callum felt he had to put some things right and show he was here to do one thing only and that was win!

Things got off to a perfect start with Callum qualifying on pole position on Friday afternoon. However, doing that was far from easy and it was an almost perfect lap that helped him go fastest by just 0.013 seconds. The times across the field were extremely close with the top 17 drivers split by less than two tenths of a second meaning Callum still had a lot of work to do if he was to start the 2020 series with a win.

In the four heats that followed on Saturday, Callum would face every other driver on circuit at least once. The Fusion driver got off to a perfect start driving just shy of four seconds clear to a comfortable win in heat one. That would be the first of Callum winning all four heats, with some a lot closer than others.

As the rest of the field were left scratching their heads on Saturday evening, Callum turned his focus to the all-important Sunday where the championship points would be awarded.

The confidence and determination from the reigning Vice Champion was clear. As the lights went out in the Pre-Final, Callum came across to take the racing line into turn one. Paying no attention to the chasing pack, Callum finished the opening lap with a gap of just half a second and that was doubled two laps later. Building his advantage almost every lap Callum would eventually take victory by 1.8 seconds scoring 34 points in the process.

After a faultless weekend, the true test for Callum would be the final. Along with the longest race of the weekend it is the one everyone wants to win and given his pace any attacks were going to come early doors. But as he had been all weekend, Callum was paying no attention to anyone else and he took what had become his routine start in sweeping across from the inside of the circuit to take the racing line through both turn one and the hairpin at turn two.

His bold approach would once again be rewarded as he checked out on the opening lap to lead by 1.1 seconds. Over the next 21 laps, local driver Enzo Leveque would throw everything he had to chase him down, but Callum would refuse to let the gap drop under a second.

Out of the last corner the emotions from Callum were clear as he stormed to a memorable victory having led every single lap of every race all weekend! It was a perfect start to the season and after the bitter end to the Winter Cup it was redemption and a sign to the rest of the field that he means business in 2020.

“Essay will be one to remember for sure. It’s nice to see all the hard work and testing the team and I have done has paid off. The whole team at Fusion have provided a great support network and it was no coincidence that the team took victories in two classes over the weekend. I’d like to say a huge thanks to them and Aventus Power for their support so far this season.”

Although a memorable weekend for Callum, he will quickly be putting it to the back of his mind. With three rounds remaining, the season is far from over and round two at Valencia will be treated as if it were the first as Callum will go in search of another victory to close off the first half of the season.

Callum’s next race will be round two of the Ultimate Karting Championships next weekend where he will look to build on his championship lead.