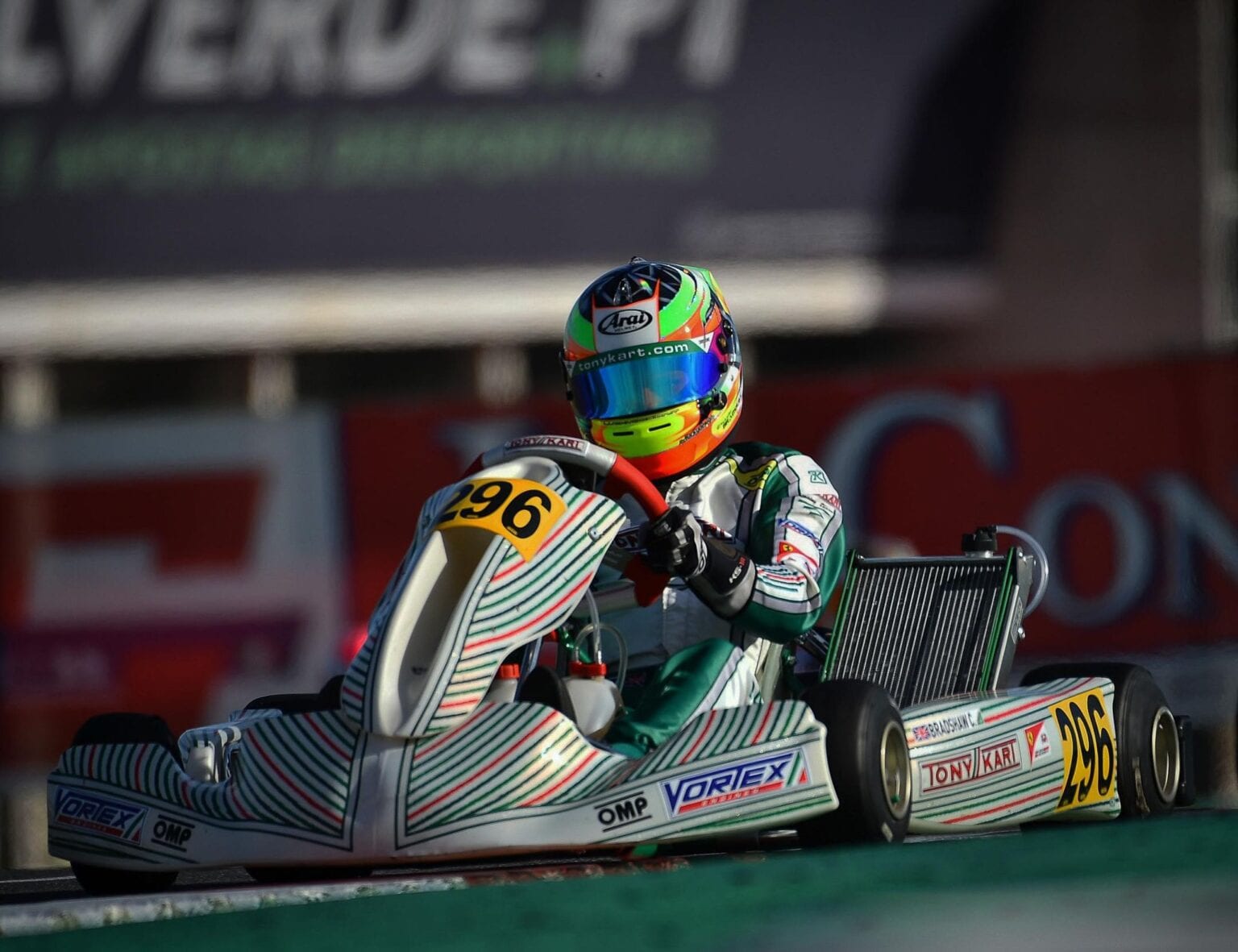 It was a strong weekend for Callum Bradshaw at the Champions of the Future (COTF) finale out in Portimao (PRT) with the Tony Kart Racing Driver finishing in 5th place ahead of the FIA Karting World Championships.

It had been six weeks since Callum made his debut with the Tony Kart Racing Team at Wackersdorf (GER) in the last round of the European Championships. Since then with no races Callum has only been able to do some testing with the team and even that has become difficult to do with restrictions becoming tougher around the World.

For the whole paddock the COTF race in Portimao was a much needed event for drivers to get back into the swing of things before the World Championships the following week. With a bumper entry of 75 drivers the task for Callum was not going to be easy with the British driver still settling in to his new team.

However, he got off to a good start showing strong pace in qualifying finishing just 0.258 seconds off pole position. A good time, but the grouped system of qualifying meant Callum would be classified in 20th place and would have to start all of his heats from the outside of row four, a very tough place to be with the layout of Portimao circuit.

Callum would not let this phase him and in the first heat of the weekend he would get off to a great start finishing in 3rd place. He would continue to make places with a 7th in heat two but the third would sadly put a huge dent in his hopes for the weekend. After a good start Callum was calving his way through the field and was up in 4th before the halfway stage with the leaders in touching distance. But an engine seize coming onto the start/finish straight on lap five would see Callum out of the race immediately.

The DNF result left Callum a huge task ahead for the rest of the weekend, but he bounced straight back in the final heat taking another 3rd place in a close fought race. Without the problems in the third heat Callum looked on to potentially get himself in the top five on the grid for the Pre-Final but would now have to start down in 21st place.

Starting almost directly in the middle of the field the Pre-Final became all about survival. With everyone desperate to work their way up the field or stay there, Callum was left in a huge fight in the middle of the pack which involved some of the heavy hitters in the FIA Karting scene. Eventually Callum would cross the line 18th and now had his eyes on a top ten finish in the final.

Starting on the outside the start was not going to be easy with the long run down to turn two often seeing big incidents on lap one. As the lights went green Callum was able to find some space to get to the inside before turn two and that would see him avoid the huge incident that occurred on the outside talking several prisoners.

Getting through Callum would emerge in 5th place turning his race around immediately. Despite the crash there would still be a huge train of karts in the fight for the lead. Callum would then be forced to chase the top five a couple laps later after contact from behind and he would close the gap in just a couple of laps passing polesitter Nikita Bedrin. Next for Callum would be Dilano Van’t Hoff who he would catch and pass on lap eight now putting him up to 4th place.

However, with a gap to 3rd Callum would be left a sitting duck on the long run between the final corner and turn two making his task of holding position now very difficult. At a track he has taken victories on in the past Cal was able to extend his gap, but his chances of a podium were becoming slim with the top three now seemingly working together.

Cal would come under attack from Spaniard Josep Marti Sobrepera in the final couple of laps losing out on the run towards turn two forcing him to settle for 5th place at the flag. It was a brilliant result given he had started the race from 18th place. After the engine seize in heat three it was a brilliant turn around and will see Callum heading into the World Championships on a high.

The World Championships, which also takes place at Portimao, sees a winner takes all scenario with 76 drivers entered.

Qualifying will take place on Friday afternoon before the heats on Saturday and Sunday morning. A strong run in the heats is crucial as there is no Pre-Final meaning the results will determine and if and where you start in the final. It’s the race they all want to win and for Callum that feeling is no different!