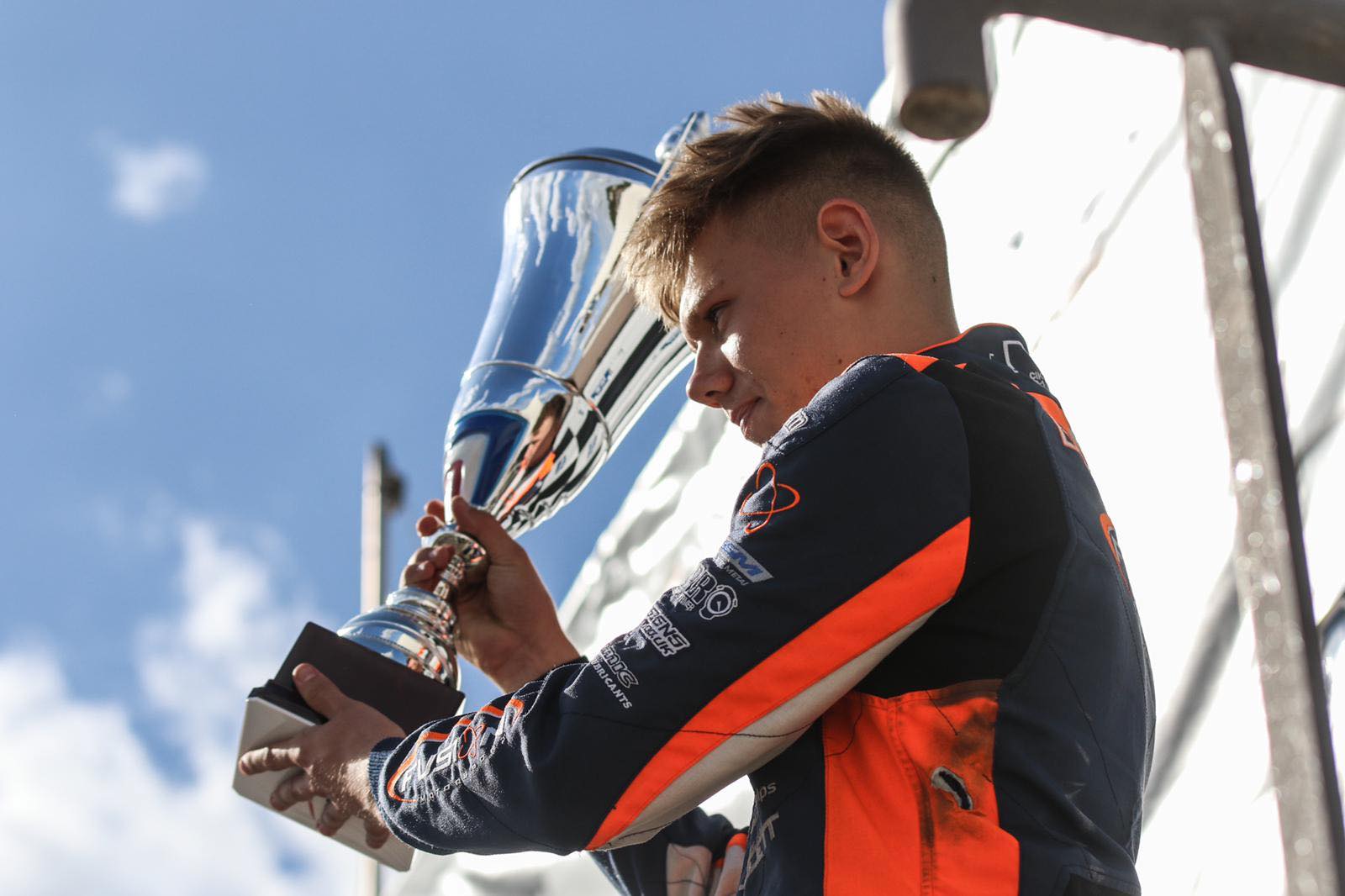 It was a bittersweet weekend for Callum Bradshaw at Salbris as he crowned himself the 2019 IAME Euro Series Vice Champion in Senior X30. Although coming in to this season Callum would have been satisfied with that result, considering how close he came to winning the title he left Salbris slightly disappointed. However, given the task he was up against its fair to say Callum excelled in his very first season of the series this year!

Coming in to the weekend Callum sat five points back from Mark Kimber on dropped scores. After a disaster at Wackersdorf Callum went from having the chance to wrap up the title early to being in a situation where he was now chasing Kimber. It created a huge shift in momentum and with Callum visiting a new track for the third time of the series his task was made even more difficult at Salbris.

But just like he did at Mariembourg and Wackersdorf Callum settled in very quickly and was immediately at the top of the time sheets. In his qualifying practice group Callum was just under half a second quicker than anyone out front and once the times were combined Callum was third overall with Kimber second. It meant he’d start all his heats from second, the first task was complete but there was still a long way to go! 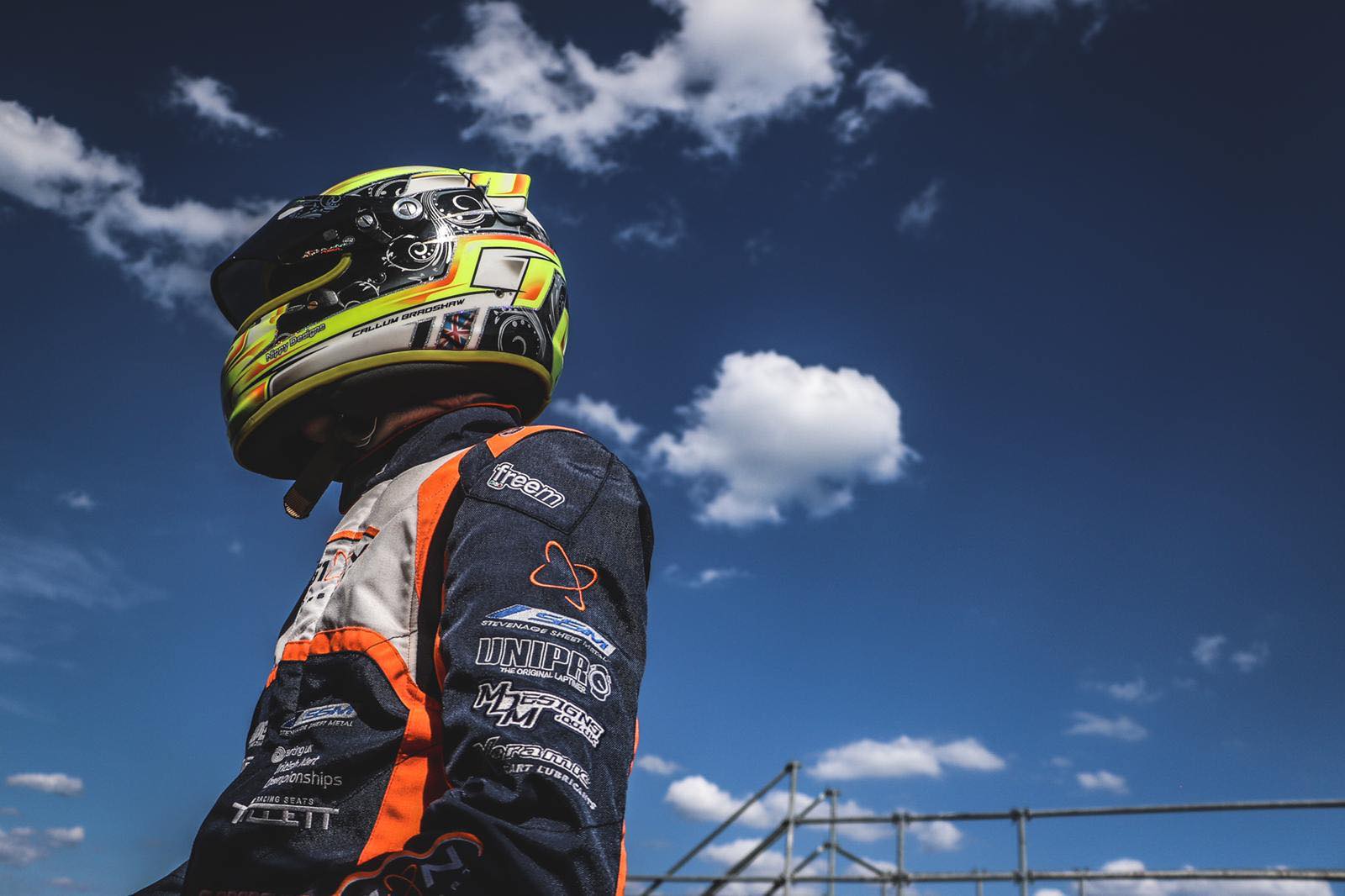 Callum got things off to a good start with second in his opening heat before going head to head with Kimber for the first time in heat two coming out victorious. A second in the final heat would cap off the day putting Callum fourth on the grid for the Pre-Final. With points up for grabs and Kimber on pole there would be work to do, but Callum knew he had the pace to fight for the win.

Greasy conditions greeted the drivers on Sunday morning but by the time we had reached the Senior Pre-Final the conditions were good enough for slick tyres. That said it would be far from comfortable as Callum discovered on the two warm up laps and getting through the first laps safely would now be the main priority.

As the race got underway there was plenty of loading going on into the second corner but Callum got himself through safely albeit with a place lost. Quickly back into fourth Callum now had a gap to chase to the top three and just over fourteen laps to do it. As the top three began to battle Callum quickly closed in and by lap three he had now made it a four-way battle.

First up would be Kimber and after quickly ticking him off he was straight after Lewis Gilbert who he would pass three laps later. Next was Sean Butcher and by lap twelve the chase was complete with Gilbert keeping close company. After exchanging places with Gilbert twice more, the situation remained the same heading into the final lap.

Butcher put up a stern defence, but out of the corner Callum timed a switch back move perfectly and drew alongside making it a drag race to the line but Butcher would just hold on by 0.03 seconds! With Kimber fourth Callum had now reduced his lead to just three points creating a winner takes all scenario for the final! 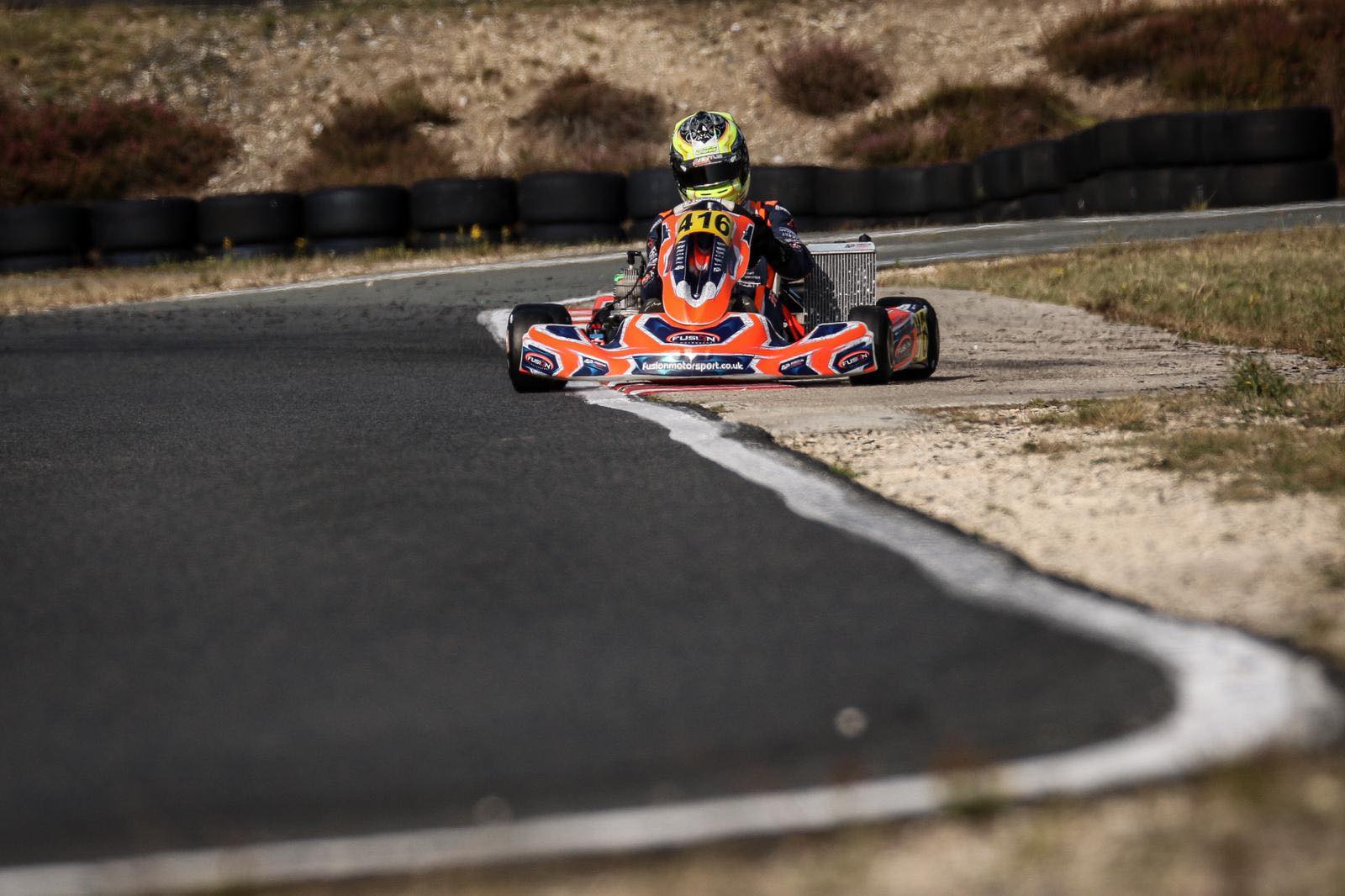 With 55 points on offer for the winner of the final and 52 for second a win would secure Callum the title. Should he finish second Kimber would need to be fourth, but for Callum the win is what he would be going for!

Now in fully dry conditions Callum got off to a good start in the final slotting in to third through turn one before getting up to second just a few corners later. Setting blistering pace Callum took the lead at the start of lap three and quickly created a one second gap to the chasing pack.

Although impressive it did also seem too good and there were now worries that the tyre pressures were too high which would result in a drop of a pace later in the race. Going into the second half of the race Callum had been hunted down and claiming the title was now going to be difficult with Butcher, Kimber and Gilbert to hold off.

Butcher struck on lap twelve with a move at turn two, but Callum would repay the favour a lap later. With Kimber going into second Callum had to keep one eye over his should but he would slip through on lap thirteen. Heading down the back straight seeing danger behind Callum knew he had to back in front of Kimber and tried a brave move around the outside of the turn six hairpin. 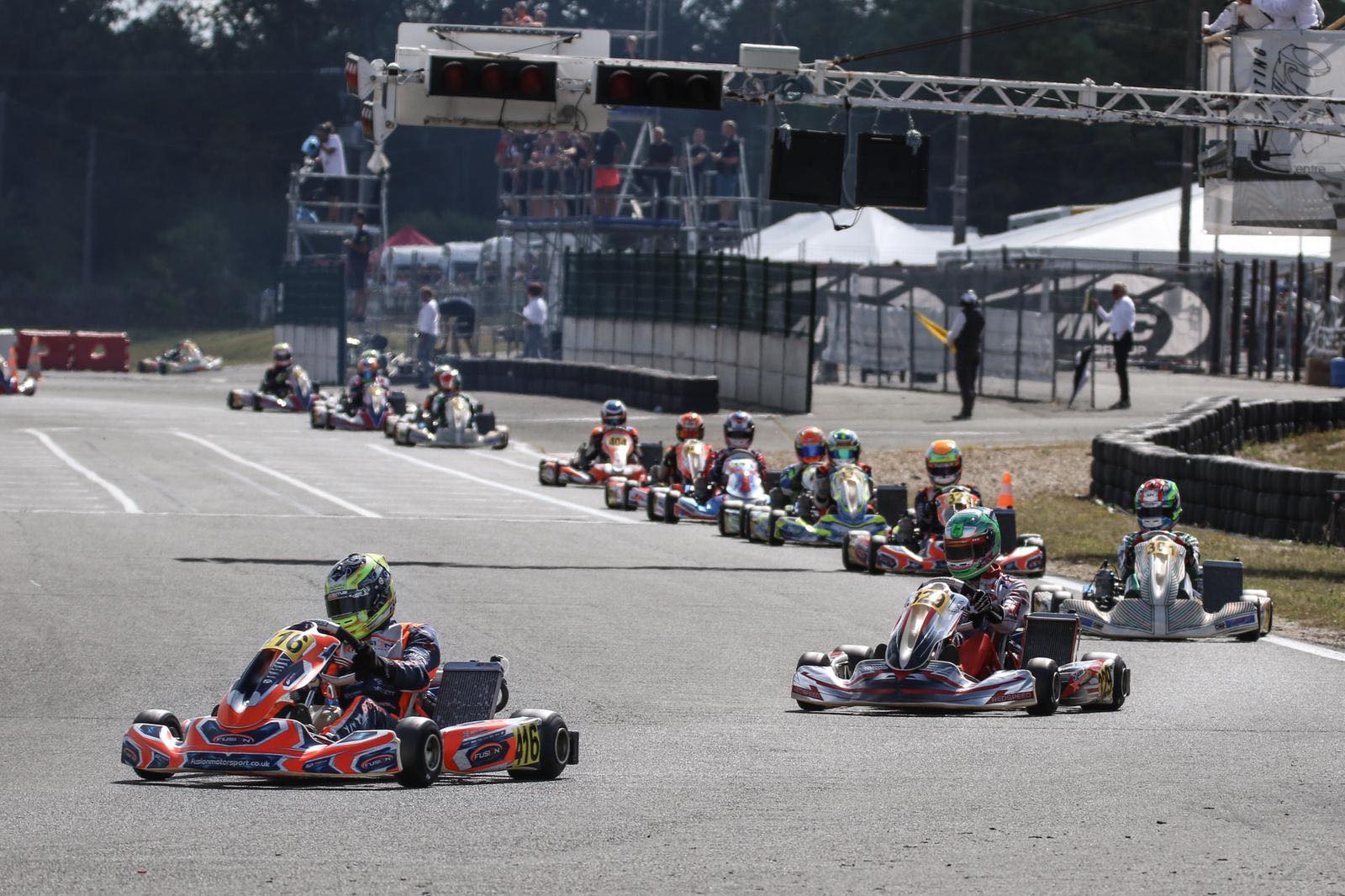 Although unsuccessful it was a warning to Kimber, but the next few corners would be where Callum’s title hopes disappeared. Following Kimber’s defensive line into turn nine the pair both got poor exits and it allowed Butcher, Gilbert and Prince all to pass Callum with Kimber still leading.

The afore mentioned trio then ensued in a heavy battle for second allowing Kimber to walk away with the race win. It created a frustrating situation for Callum who was forced to fight for second rather than with Kimber for the race lead and for the title! But Callum never gave up and would eventually go on to finish third leaving him second in the championship.

A frustrating end to the season and not the fight to the flag everyone wanted to see. But considering it was Fusion’s first year in the class, Callum’s first year in the series, his first visit to three of the four tracks and with a serious limit of track time he put up a valiant effort. Although proud of his and the team’s performance Callum is a champion inside and would have loved to walk away from Salbris with the title in his hand.

Callum Bradshaw: “I’d like to thank everyone at Fusion Motorsport for all their efforts over this year, we went to every track and showed we had the pace to win. Considering this was the team’s first year competing in the Senior class, I don’t think we did a bad job!”

All focus now turns to the IAME International Final in October at Le Mans. A former Vice Champion and podium finisher, Callum is hoping to remove one word from that title and finally come home as the Champion. 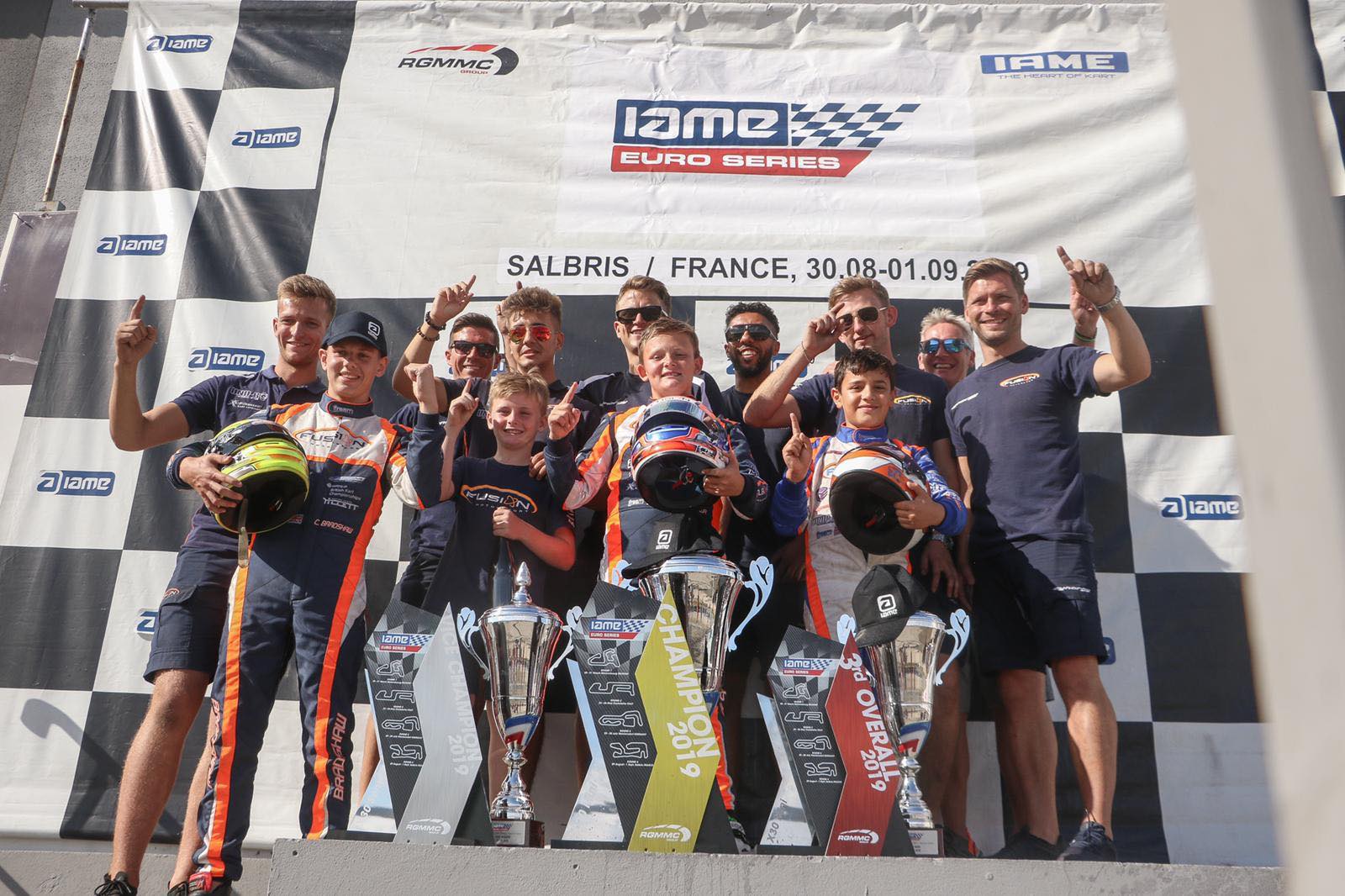