Callum fights back to 10th at 23rd Winter Cup 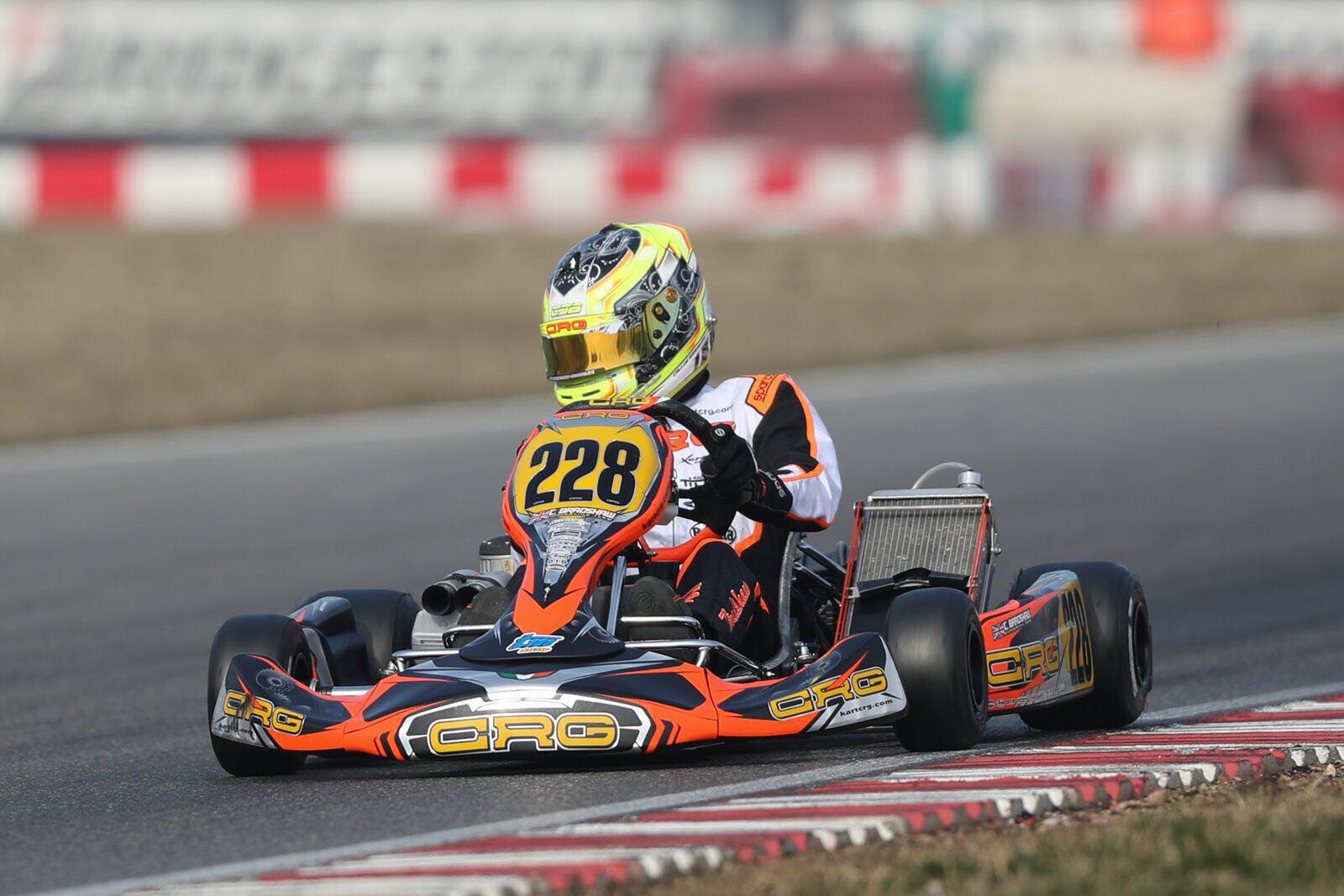 It was a roller-coaster weekend for Callum Bradshaw at the legendary Winter Cup, which saw a great start to the qualifying and the heats before bad luck struck later in the weekend. In a grid of 86 drivers, Callum still managed to comfortably make it into the final and from there battled hard for a top ten spot despite having to deal with some setbacks mid race.

It’s the event often referred to as the official shakedown to the International Karting calendar with the World’s best hoping to all get their season off to a good start. For Callum, coming in as the SKUSA Winter Series Vice Champion, gave him the confidence to go on and achieve a very good result.

That all looked on the cards early on, 9th overall in qualifying practice was quickly followed with a 3rd place in heat one. Heading into day two, there would be another two heats for each driver and Callum continued his consistency with 6th place. It was a result that could have been a carbon copy of heat one, but that was unfortunately taken away from Callum after he was shoved on to the grass by another driver. 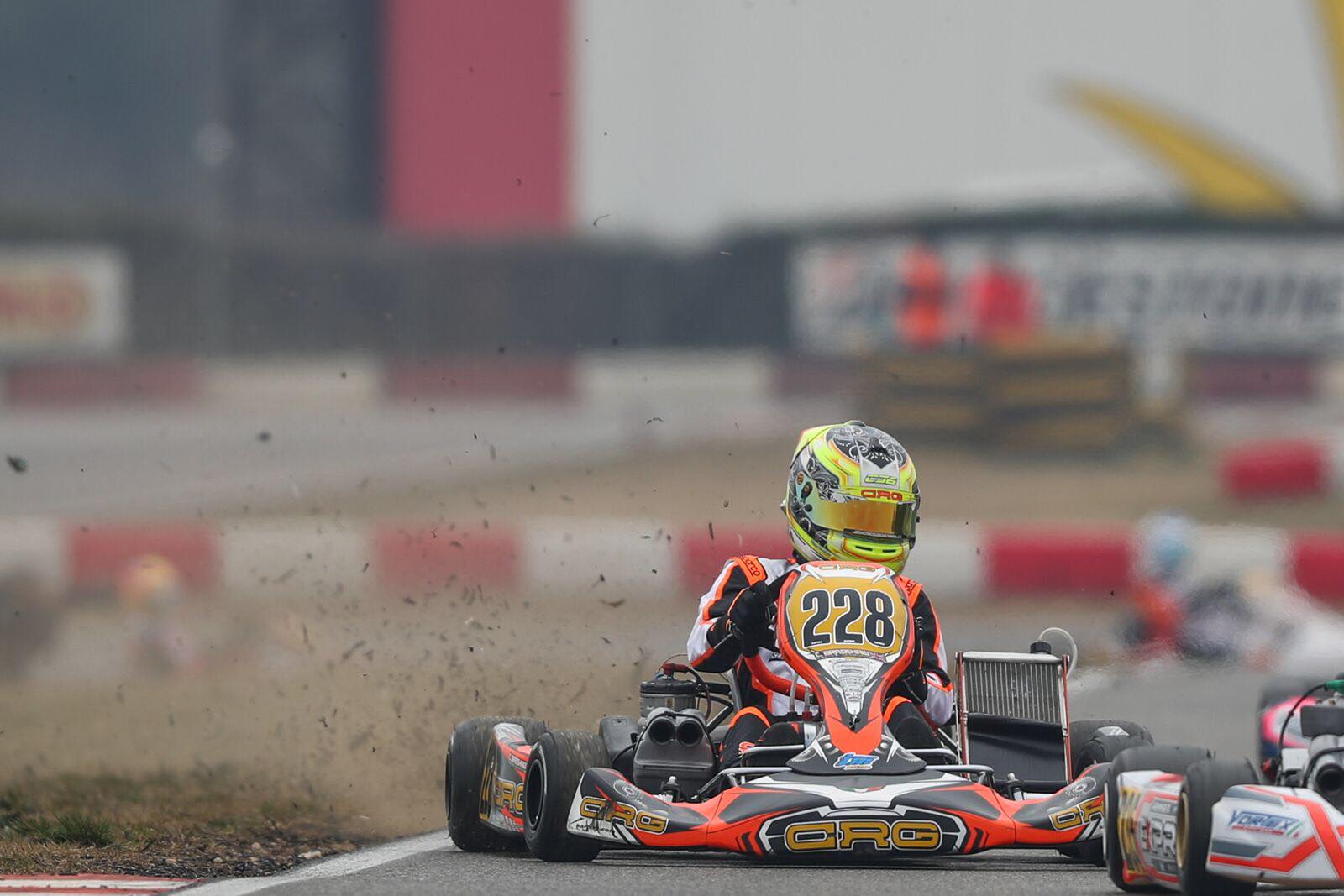 Heat three saw Callum take another 6th place, but a ten second penalty post-race saw Callum demoted to 21st place! It was a result that lost Callum fifteen points and left him 8th on the grid for his super heat rather than 4th! A big hit to take, but the super heat would provide one last opportunity to score points before the all-important final.

Starting that little bit further down the pack left Callum amid all the chaos with drivers desperate to score as many points as possible before the final. If that wasn’t bad enough already, the rain had hit Lonato making it the first wet outing of the whole weekend! Unsurprisingly this led to collisions and multiple nose cone penalties for drivers up and down the order which included Callum. He had finished a respectable 10th place, which would quickly turn to 17th. The seven points lost didn’t cause Callum too much damage as he would now start the final from 18th place, rather than 16th.

The final saw all drivers out on brand new slick tyres on a damp track with a dry line appearing in places. As the race went go on, drivers would eventually get very close to the times being set earlier in the weekend, but until that point it was just about staying on track. Callum described it as ‘the most challenging conditions I have ever driven in!” 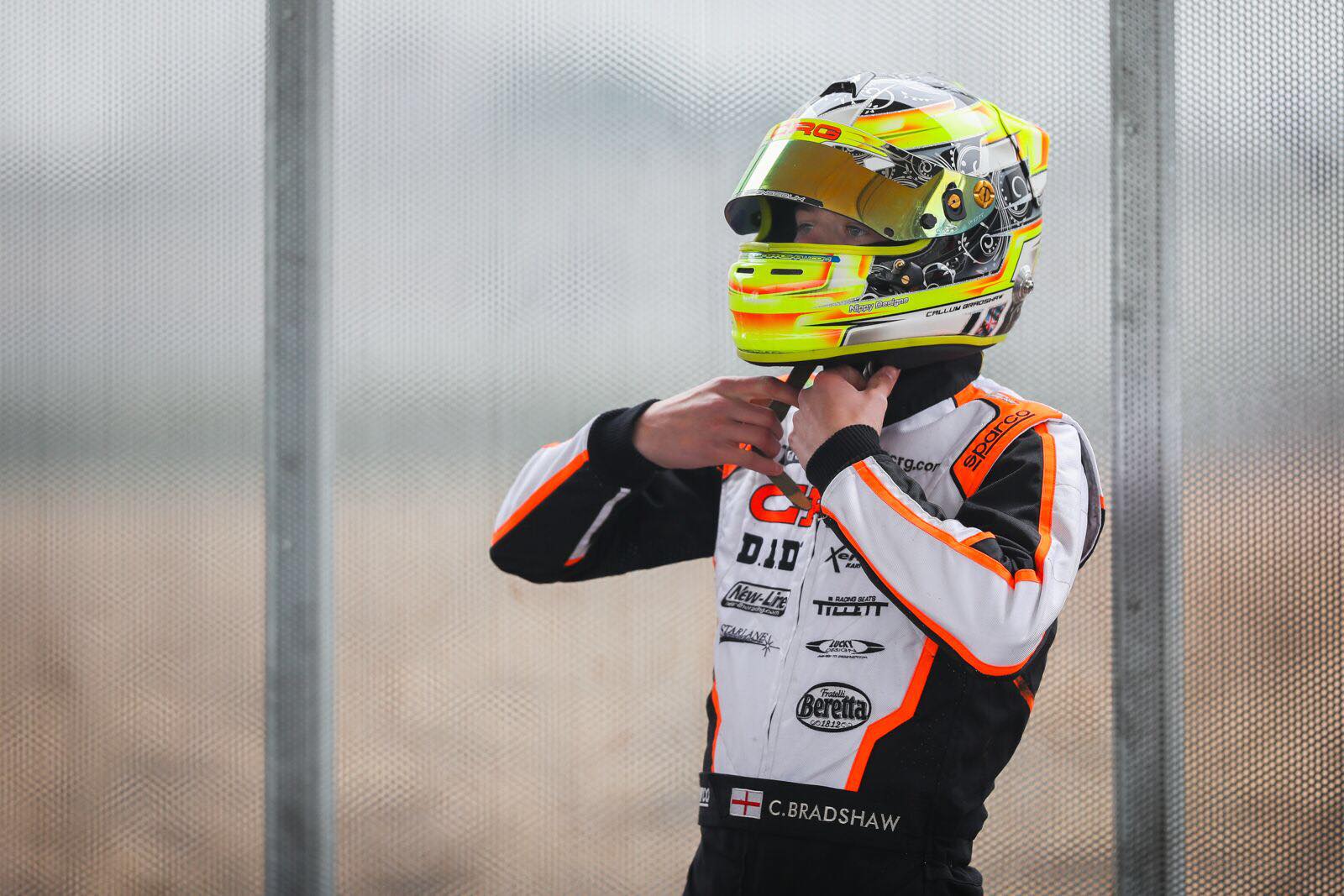 The start of the race saw 34 karts hurl their way into the first corner which is almost flat out in dry conditions. Straight away two or three came victim to the conditions, but for Callum it was a solid start as he moved straight into 16th place keeping his nose clean. A lap later and Callum was up to 13th place with a top ten spot only a few tenths up the road. But as Callum started lap three going into turn one he became one of many drivers to run wide on the damp surface. Thankfully Callum kept it out the barriers and in a straight line, the same couldn’t be said for several other drivers!

Re-joining the race in 23rd place Callum now had just under 20 laps to get his head down and make as many places as possible with a top ten result a very big ask! But lap after lap Callum started to make more and more places and a top ten finish now looked a possibility as he sat in 16th place after 15 laps. Catching a group of drivers ahead which contained fellow Brits Tom Joyner and Dexter Patterson, Callum had one of the scariest moments in his Karting career to date! Heading through turn one a three kart pile up directly ahead of Callum saw one kart launched into the air and if Callum had not ducked he may not have got through as safely as he did!

Callum would emerge from the incident in 12th place, but the position gain had subsequently lost him a huge chunk of time to the top ten. Callum would go on to make one further place on track to take the flag in 11th before gaining one more place post-race to get that top ten spot he had been aiming for going into the final! 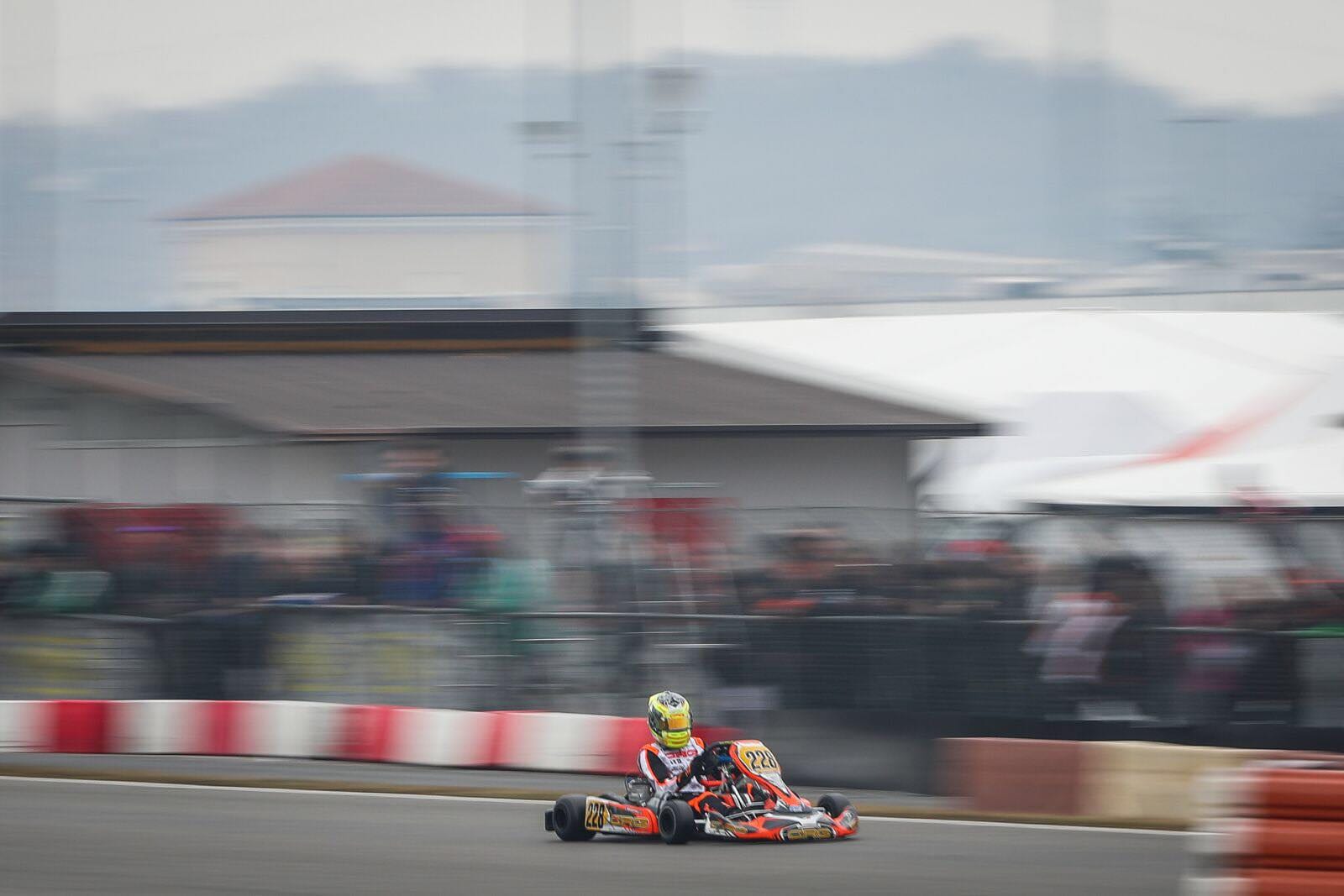 After the race Callum commented: “It was disappointing weekend for us at the Winter Cup if I am honest. After another very good qualifying I made some mistakes during the weekend. We had the pace to have a very good final and the tricky conditions are what I love the most! We will be back fighting next week for WSK.”

Callum has had a lot of challenging races in his career and in that has had to deal with a lot of tricky conditions. But this is one that stuck out to Callum as the hardest, the South Garda track is tough as it is let alone when it’s damp and you put 34 of the World’s best OK drivers out on slick tyres. However, like the true professional he is Callum stayed calm, even after his mistake, and came through to finish a deserved 10th place!

It’s a big improvement on Callum’s performance at the Winter Cup last year where he finished 23rd place. 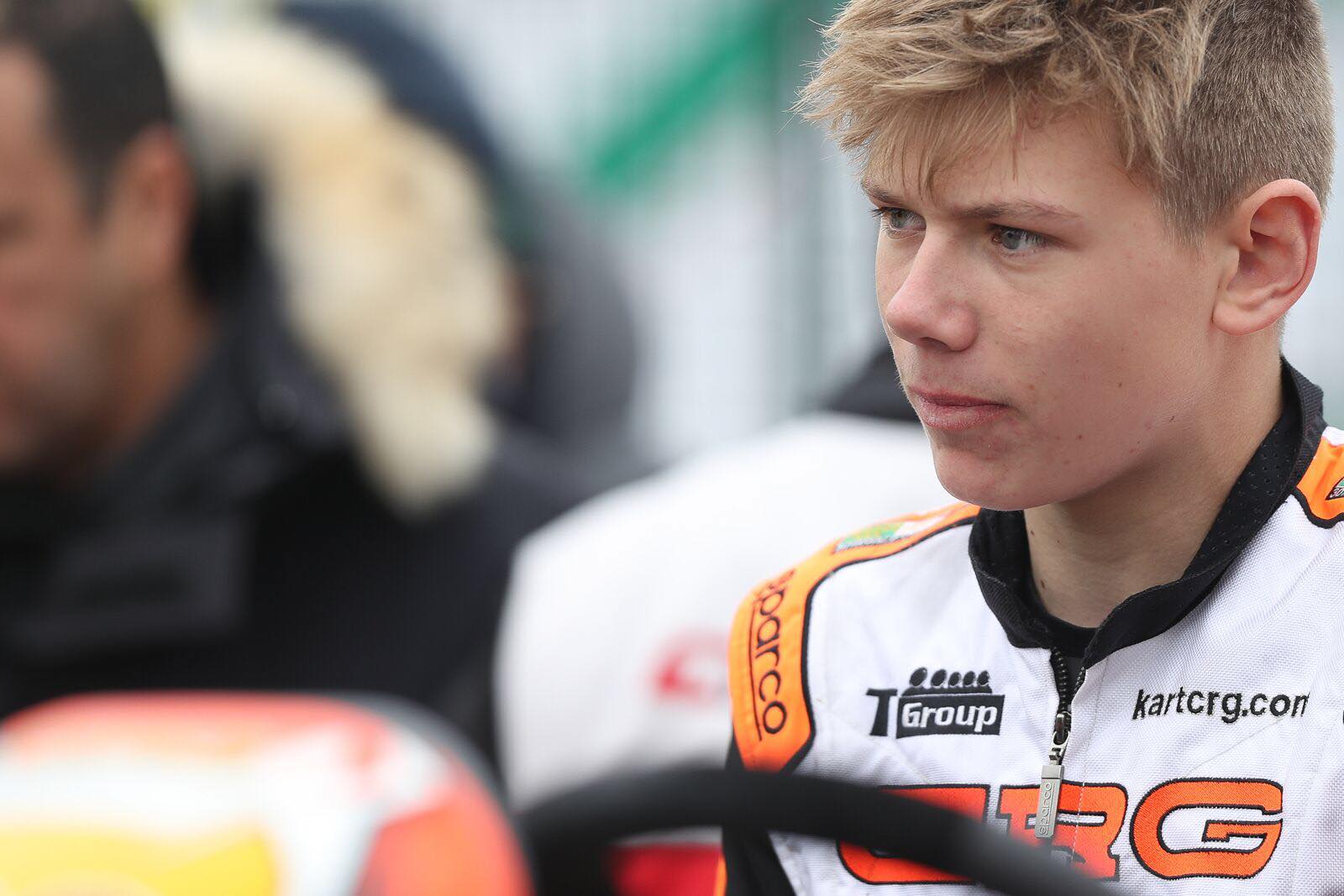