Callum out of luck in Vegas 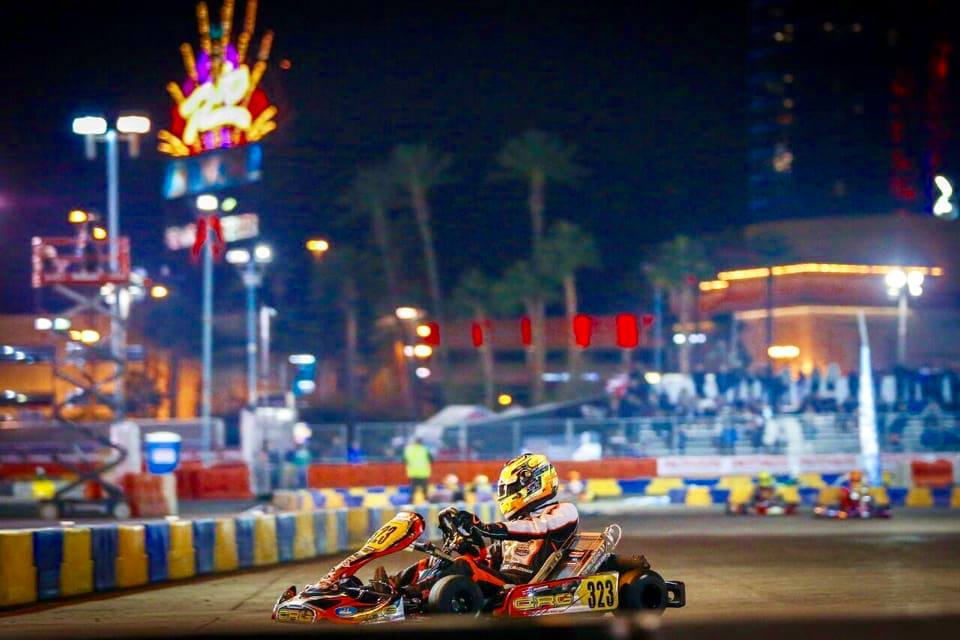 As 87 of the World’s best assembled in Las Vegas for the 22nd running of the SKUSA SuperNationals, Callum Bradshaw arrived in high spirits hoping for a good end to the 2018 season. There’s no better way to wrap up a season than in sin city itself and this year the event would take place at the Rio Hotel on a purpose-built circuit with the layout untested by any driver before the weekend to help make a level playing field.

However, from the off things did not get off to a good start with Callum struggling to get near the quickest times in Practice. In Qualifying Callum was able to bring the gap down to pole position to just four tenths but in such a competitive field that left him down in 40th place and a tough task ahead if he was going to make the Final.

With over 40 karts on track in each heat bad starts would be heavily punished and Callum would discover that very quickly in heat one after getting caught up in an incident on lap one which left him all the way down in 38th place. In just twelve laps he put up an astonishing recovery to charge his way back through to 19th gaining nineteen places in the process!

With only two more heats remaining Callum would need to stay out of trouble but also take a gamble when given the chance and that’s exactly what he did getting off to a fantastic start moving up to 14th. Despite being out of the top ten Callum was still battling with the likes of Jake Drew, a major Karting star in the States, and eventually finished 20th. Without one clean lap, he was never able to get a fast lap in but it was nevertheless a decent result.

The third and final heat needed Callum to get a good result to avoid the Last Chance Qualifier and despite a bad start to the race Callum was quickly back fighting passing the likes of Milan Petelet, Jorge Pescador, Ryan Norberg and Jake Craig. He picked up his best result of the weekend with 14th place, but a harsh penalty dropped him four places leaving him in 18th place.

If that weren’t hard enough to take it was those four points that would leave Callum in the Last Chance Qualifier rather than putting him straight into the Final.

Callum would start the Last Chance Qualifier from fifth on the grid and with the top six going through all he’d need to do is hold station, but with over 40 drivers on track and everyone desperate for a place that would be a lot easier said than done. Callum got things off to a good start, but things quickly took a turn for a worst. After getting caught up in furious battles Callum’s race eventually ended far from the chequered flag is his chances of racing in the Final had gone.

It was a huge shame given his fight back after a tough qualifying and some difficult race starts. To even be with a chance of the Final was a brilliant result and things would have been so different had he not picked up that penalty in the Final race. But that’s racing and Callum left Vegas with the same feeling most do having lost out despite it being yet another amazing experience in 2018.

That concludes the season here, but be sure to stay tuned with 2019 plans due to be revealed in the coming weeks!