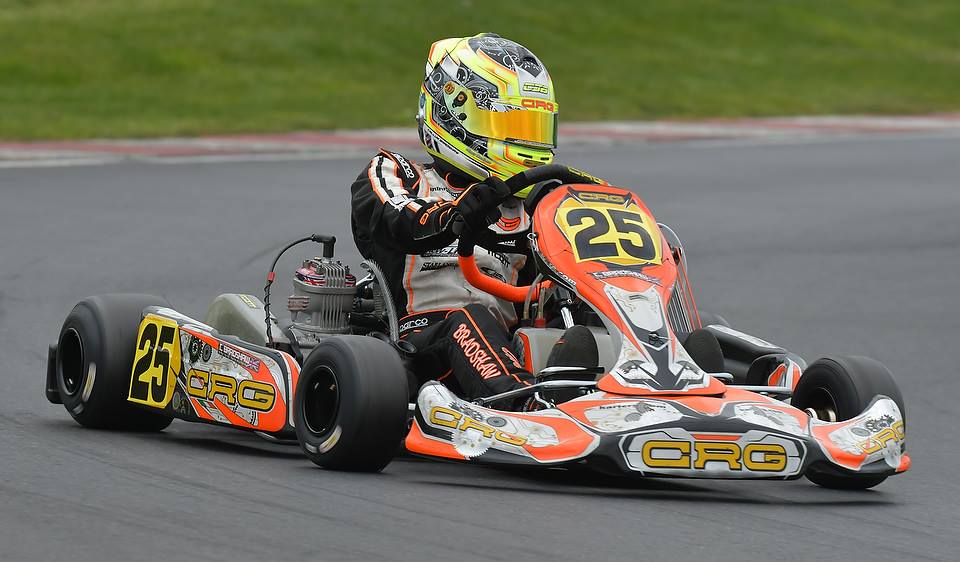 Callum Bradshaw was just corners away from taking an almost certain podium at Kartmasters, possibly even a win, in the Senior X30 win before an incident saw him pushed back to 6th place! In the OK class, luck was not on Callum’s side with a seined engine forcing an early retirement from the final.

Let’s start with the Senior X30 class, 64 drivers entered into the event including some of Callum’s factory CRG teammates. But the big opponents came in the form of Oliver Hodgson, Danny Keirle, Brett Ward, Ben Barnicoat, Elliot Harvey, Jacob Stilp along with many other British, European and World Champions.

The format was pretty straight forward. Both Friday and Saturday would consist of a qualifying session followed by two heats. Points collated would form the Pre-Final grid and the result of that would shape the grid for the Grand Final.

Transferring from the OK class to the Senior X30 class can be difficult as Callum’s teammates were about to find out, but for the Leicester based driver it came very quickly as he got proceedings underway with 9th in Friday’s qualifying session. That was followed by a 7th and a 6th place in the heats, it was a solid start with consistency being the key in any Kartmasters weekend!

Saturday saw a turn in pace with Callum qualifying 5th place just 0.16 seconds off pole. The opening heat Callum held position but took the fastest lap of the race which would see an improvement of result in the days second heat. In that race Callum finished an impressive 2nd keeping Hodgson very honest all the way to the flag.

The combined results over Friday and Saturday had put Callum 6th on the grid for the Pre-Final with now two races to try and work his way through to the lead. A sensible driver in the Pre-Final saw Callum set himself up perfectly as he finished 3rd place. It was the calm before the storm with no serious drama or hundreds of overtakes, that was all about to final in a dramatic final.

From 3rd on the grid Callum followed went straight through to 2nd at turn one. In what was a closely knit top ten Callum took the opportunity to take the lead at hairpin one on the second lap before Keirle got a switch back move one corner later. On the exit Callum noticed the pair had been able to get a gap with drivers battling behind so he decided to work with Danny to push away.

For the majority of the race it was largely between Callum and Danny, that was until Oli Hodgson closed the pair in with four minutes to go bringing Barnicoat and Thomas Turner with him. Callum lost 2nd to Hodgson shortly after and it looked as if his kart was losing pace, but Callum dug deep and with three laps to go regained 2nd. Up ahead Keirle was now defending from Hodgson and that allowed Callum and co to catch and as Callum went for the outside at hairpin one Barnicoat went up the inside. It was a risk, but with risk comes reward and with Barnicoat not timing the move correct he was able to go straight back through to 2nd.

Now behind Keirle once again the penultimate lap saw all drivers defending with the last lap board now in sight, bar a brief trip to the grass for Barnicoat after an attempted move around the outside of Callum. As the drivers went on to the last lap Callum was in a good positon, especially after he gapped Hodgson and Barnicoat out of hairpin two.

Going into Bobby Game corner for the last time Callum had no need to defend so set Keirle up for the switch back, but before he could even turn into the corner an out of control Hodgson clattered straight into Callum dropping him to 6th place. The damage to Hodgson meant he didn’t even make the flag, whilst Callum grabbed 4th after post-race penalties. Hodgson was quick to apologise to Callum post-race saying he had been pushed into the corner which Callum understood, but it nevertheless saw a certain podium robbed. Had he got through the corner safely it may have even been a win on the cards!