My journey to the FIA Karting Academy Trophy title: Part 2 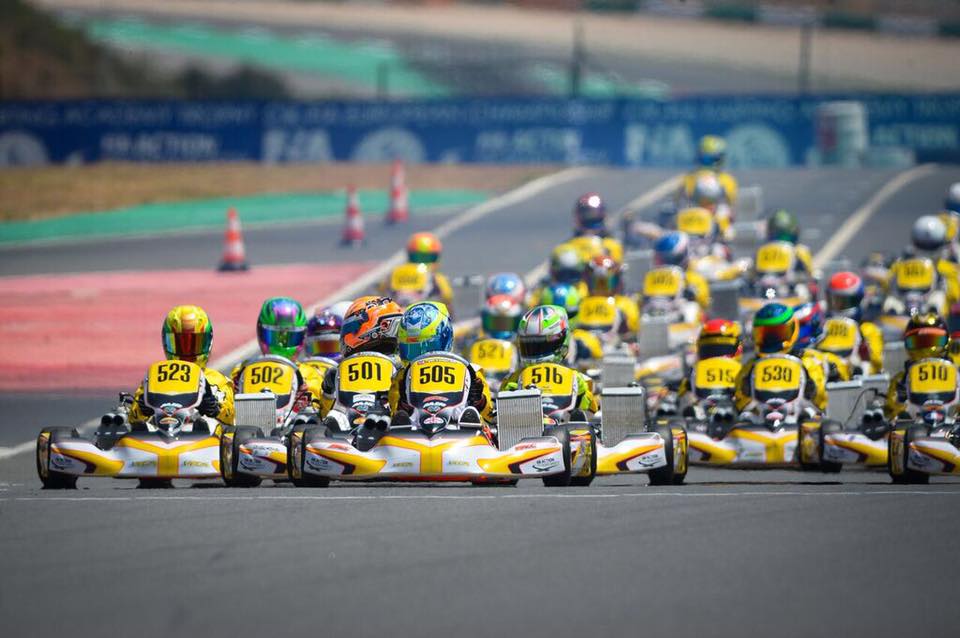 After a dream start to the season, Callum arrived at the Portimao circuit with a chance to wrap up the title. To do so other things would need to swing his way, but after his faultless performance at Essay, which saw him score a maximum score of 35 points, confidence was high and he had already put one hand on the title with only two rounds remaining.

Previous British drivers to take on the series included current Williams F1 driver, George Russell, along with the likes of Ben Barnicaot and Ross Martin. Although some had come close, none had ever won the championship and Callum was now here to change that.

The second round of the 2016 season would take place at the Kartodromo Internacional do Algvare. Located on the south coast of Portugal the circuit lays parallel to the Autodromo circuit and had played host to some major karting events in the past.

The track was the biggest on the calendar stretching to over 1500 metres in length with the main straight over 160m long and 10m wide. It’s long straights and fast sweeping corners, combined with some heavy braking zones, were set to provide some fantastic racing over the weekend.

A drive of a champion

After a brilliant first round, Callum arrived at the circuit high in confidence and picked up where he had left off straight away finishing 3rd overall in qualifying, which would put him on the front row for both of his heats.

Despite starting on the outside Callum did a good job to hold position and settle into 2nd on the opening lap of the first heat. Although he had lost half a second to Alfred Nilsson ahead, it wasn’t long before he had caught the Swede and took the lead on lap three. From there, although the long straights would help keep Nilsson close, Callum’s pace around the rest of the circuit was enough for him to hold on and take the win.

Heat two saw Callum going head to head with pole-sitter, Xavier Handsaeme. However, the race to get there would be far from straightforward with Callum being pushed back towards the lower order of the top ten. Over the next five laps Callum would slowly fight his way back before eventually getting into 2nd with two laps to go. With the gap now half a second it was too much to close, but a 2nd place would see him on the front row for the Pre-Final and score him nine more championship points.

With Callum limiting the damage to just two positions lost on the opening lap of the Pre-Final, he was quickly able to put himself into 2nd by lap three. From there he settled down behind Handsaeme leaving a gap to open up behind, before eventually making his move for the lead on the penultimate lap of the race! It would become the race winning move with Cal going on to win the Pre-Final and now a win in the Final would see him all but seal the title.

However, his goals of a race win took a huge blow early on with Callum’s engine oiling up in the first couple laps. The dramatic drop off in speed would see him tumble down the order to 7th. It gave Handsaeme a comfortable gap out front and Callum the task of trying to fight through what was turning into a fierce battle for 2nd.

However, with the problems seemingly cleared up, Callum got his head down and began picking his way through the pack. By lap six Callum was into 4th setting the fastest lap in the process, but he now had a gap of over a second to 3rd place. Four laps later and Cal had caught Spaniard Ruben Saura and wasted no time making the move.

His next target would be Kasparas Vaskelis (LTU) who was 1.4 seconds up the road. But similarly to Saura, Callum was with him in just a few laps and went straight into 2nd. With Handsaeme three seconds clear and just two laps remaining all Callum could do was settle for 2nd.

Given his current situation in the championship the result was as good as a win with Callum just six points away from a maximum score, meaning he had almost wrapped up the title. The only way he could be stopped was if Handsaeme scored the full 35 points at Kristianstad, if Handsaeme was to not be on pole for the Pre-Final then Callum would just have to keep his nose clean and avoid any disqualifications to take the championship win.

For Callum, all the hard work was now done, but the job was not complete just yet and he would hold off his celebrations until he had the trophy in his hands at the season finale in Sweden.

Part three will be released next Thursday.