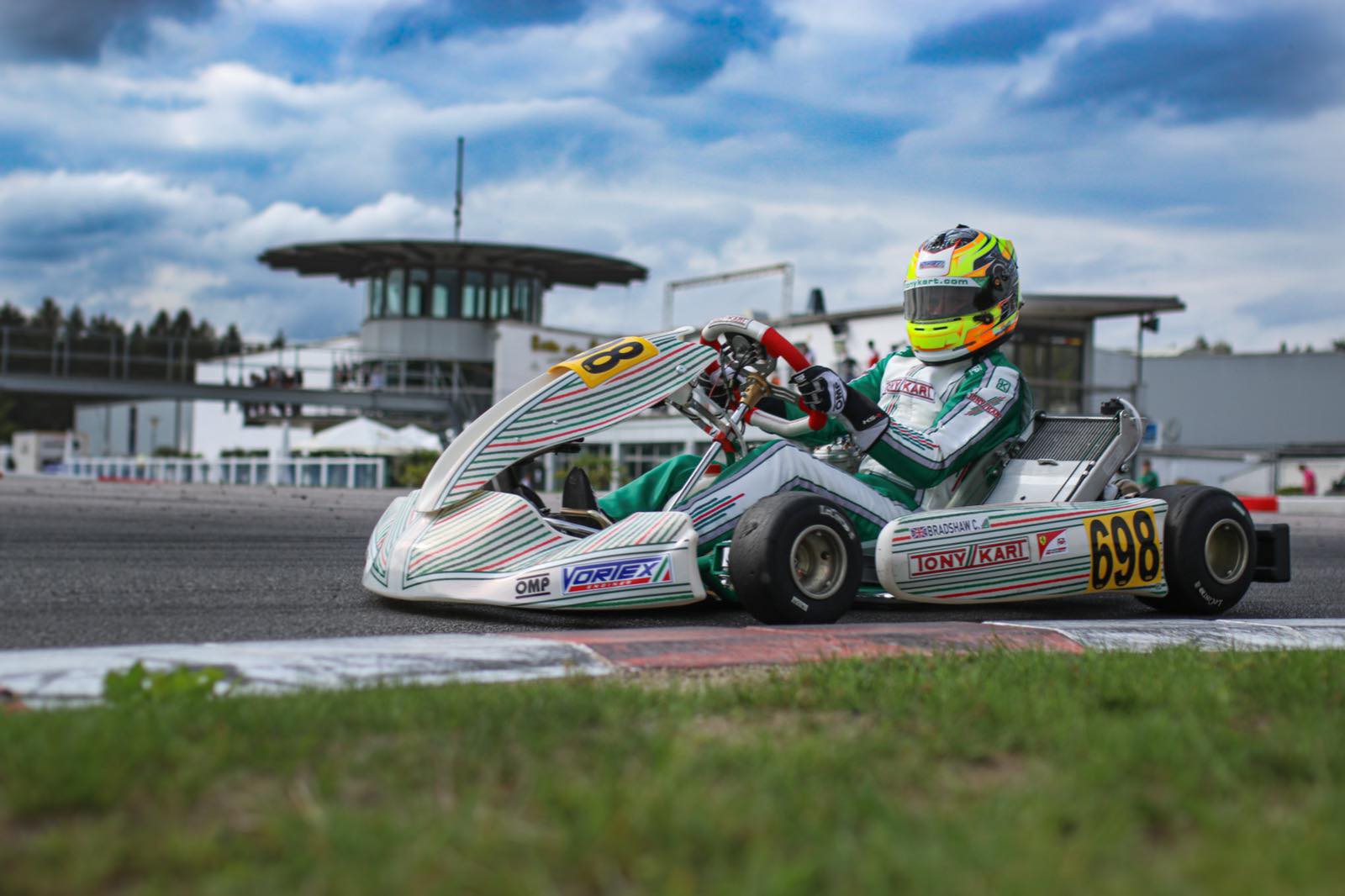 It’s a moment any karting driver past and present dreams of, the opportunity to drive for the most infamous kart team in the world; the Tony Kart Racing Team. For Callum Bradshaw that dream would become a reality last weekend as he took to the Wackersdorf circuit in Germany to make his debut in the green and white stripes.

Following an amazing, and arguably unrivalled, return to racing after the delayed start of the season, Bradshaw was ready to carry his fine form back to the FIA European Karting Championship stage on his debut for the Italian outfit. It was Callum’s first return to the championship since 2018 and it’s fair to say this time he was coming back even stronger than before.

The weekend took Callum over to Germany to the challenging Wackersdorf race track for the final round of the European series for 2020, and expectations were rightfully high.

But Callum would live up to those expectations straight off the bat with a strong run through the free practice sessions, which included a 2nd place in free practice one. Qualifying in Germany would see a convincing performance from Bradshaw as he continued to adapt to his new team and to the category Callum has been absent from for over 18 months. After an impressive session Bradshaw would finish 8th in group only 0.2 seconds off group pole.

Following the quick pace in qualifying Bradshaw would now start his first heat from row six and was poised to keep up his form and the turning of heads on his debut. This determination was clearly shown on track as Callum showed his class and drove through the field to take his first chequered flag as a member of the ‘Green Army’ in 9th.

Things got even better throughout Saturday’s racing with Cal taking 8th in his second heat before rounding off nicely with a 5th place in heat three finishing right behind teammate and fellow Brit, Joe Turney.

Sunday started off in the best way possible for Bradshaw topping his warm up session with confidence clearly building on every visit to the circuit. The final heat of the weekend confirmed Callum’s pace as he battled through to match his first heat result of 8th in a tough and challenging race.

The result would leave Bradshaw 14th on the grid for the final and in a grid of 65 drivers, it was an impressive result considering how little testing he has done! Clearly a sign of things to come that left smiles all round in the Tony Kart awning.

Heading into the final Cal had his sights set on a top ten finish, but unfortunately the race would not quite play out the way the team would hope. From the off Callum was struggling for grip which would see him under huge pressure in the midfield. Despite the issues Callum would get his elbows out and bring the kart home in 17th place, a good result considering the circumstances.

Although it didn’t quite end the way he’d hoped, overall it was a strong weekend for Callum on his return to the FIA Karting Championship and his first with the Tony Kart Racing Team. He showed session topping pace, confirming what had been shown in the IAME class. It proves Bradshaw is only racing with the team for one reason. To win!

Now attention turns to the WSK Euro Series, with rounds two and three taking place in Lonato this week. After a strong debut, they will look to build onwards and upwards.