Back on home soil 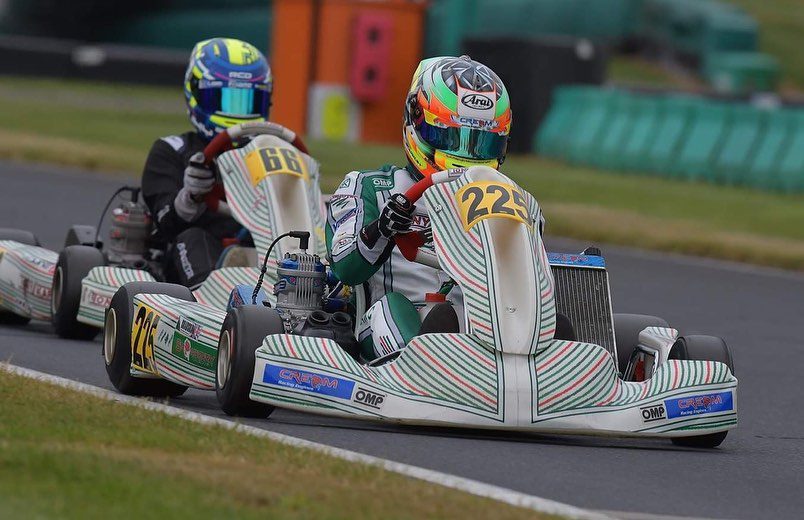 It was a welcomed return to racing in the UK for the driver who has stolen all the headlines out in Europe after total domination in the X30 and Rotax classes. Back in the UK, Callum was ready to take on one of the biggest events of the year, the IAME 0-Plate, a one off event where the best drivers from the world would battle it out for open championship glory.

The weekend got off to a great start in qualifying, displaying Callum’s ability to quickly adapt from circuit to circuit, going top in group and claiming third overall ahead of his 3 heats to come. This was an ideal start for the World champ who was looking to do the triple and claim three titles in as many weekends. Now in a great starting position, optimising the heats was going to play a big factor in the weekend’s success.

Heat one would see Callum launch from the strong starting position of 3rd. Immediately it was clear how intense the racing was going to be and with Callum firm favourite no one was giving an inch out on track. After a highly intense battle from start to finish it would be third on track. However, this result would be short lived after a front fairing penalty would be applied and Callum would officially end up 9th to start the weekend. Now with an uphill battle on his hands it was going to be essential to keep it consistent and clean going forward.

Heat two was a massive step in the right direction of the weekend with Callum starting from the front row, he kept his nose clean, pushing hard from start to end securing 2nd at the flag and a good points haul ahead of the final heat. Heat three would see another front row start and this time Callum had the upper hand on his opposition, soon moving into the lead and taking control of the race. This ensured Callum’s first win of the weekend and boosted confidence ahead of the two Pre-Finals to come.

The combination of the damage in heat one followed by two superb heats placed Callum 4th overall and secured him a second row start for the first of two Pre-Finals. As lights went out, the racing was more intense than ever with every driver pushing it to the limits while also ensuring to keep their front fairing clean to avoid what would be a catastrophic penalty. Callum did this with ease and would finish the first Pre-Final 5th. With that result dictating his grid slot for the second, the racing got underway with Callum looking fast and in control of his green machine. Pushing hard and fighting for the win, Callum was in an intense battle with some of the best, including the top 3 for the Kartmasters event earlier in the season. Callum would hold on and secure 3rd in this race and now find himself on the second row of the O Plate final.

The final was going to be intense with a winner taking all the result, and it was intense. As things got underway, it was clear Callum had a strong shot, trading positions for the lead corner by corner putting on an awesome display with some incredibly clean racing. With a few laps to go Callum was firmly in the hot seat, leading the race with the opposition hot on his heels. However, as the final laps loomed, contact would occur when a competitor attested a move for the lead, pushing Callum to the back of the top five with less than as many laps to go. This left a mountain to climb and only seconds to do it. Callum would claim 4th at the flag and narrowly miss out on the podium.

A tough pill to swallow after a sensational return to UK racing. Now all eyes turn to some World championships for Callum and his Tony Kart Team.