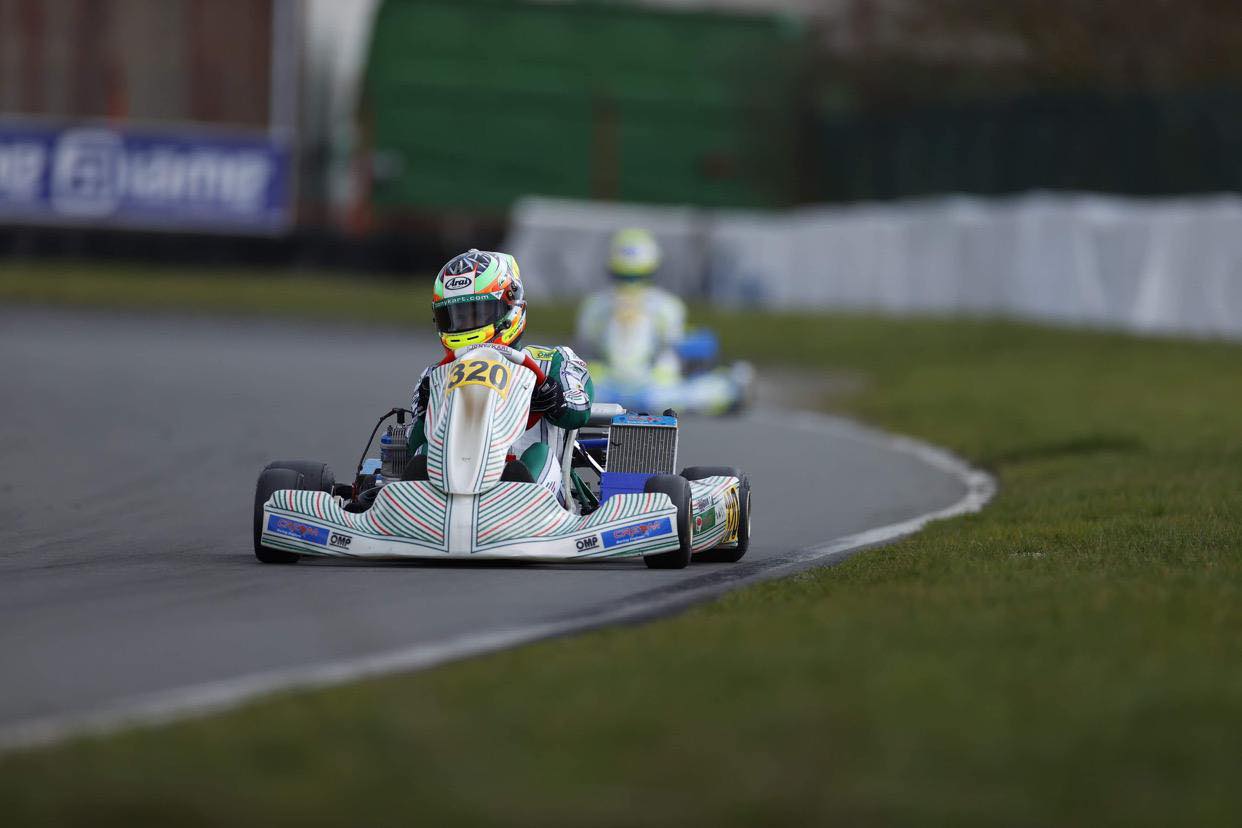 Last weekend saw a return to track and a return to Castelletto for the penultimate round of the IAME Euro Series. Heading into the round with a commanding championship lead, Callum Bradshaw had consistency on his mind and was ready to deliver on the main stage once again.

Coming off the back of a dominant display in Zuera (ESP) Callum was looking for much of the same over in Italy. The weekend started off strong for Callum with pace throughout practice looking promising and heading into qualifying as one of the hot favourites. Qualifying got underway in great fashion with Callum hooking up some great laps early in the session going to the top of the charts early on. Callum would remain at the top right until the flag and would end up 3rd overall in the classification with a time of 1.06.855 seconds, in some difficult conditions. This result would now see Callum start from the front in all five of his up and coming heats and ready to deliver.

The first heat was a real clash of the titans with Callum and fellow former FIA World Karting Champion, Pedro Hiltbrand, fighting it out at the front for the win. After nine laps of intense battles and some masterful racing from the pair Callum would cross the line behind his rival and claim 2nd to start the day off strong and build the potential for the weekend. Heat two, however, wouldn’t bring such success as an unfortunate race would see Callum slip to the end of the top ten. Not the ideal result but having secured one of the fastest laps in the heat the potential and promise was far from gone.

Heat three of five came and the speed was back, taking a commanding victory and recovering from the deficit caused in heat two. A fantastic heat saw Callum hold off the competition and execute a near perfect race to claim the victory. Heat four was much of the same story as Callum headed onto track once again to duel at the sharp end. A fantastic race would see another top three finish from the reigning world champion in 2nd place and another great points haul building towards his Pre-Final grid. An amazing performance in the final heat saw a second victory of the day and a result which would see an overall qualification of 5th heading into the Pre-Final.

As the lights went out on the Pre-Final Callum got stuck in, applying pressure to the leaders early on. Soon Callum was up into 4th applying the pressure for a front row start but come the flag it would be 4th in the race and a second row start from the final.

The final however, did not go the way of Bradshaw. After a fanatic drive fighting at the sharp end throughout, contact would see his front fairing fall from its blocks and result in a five second penalty costing six places and an overall 10th place finish.

While the final result was not the desired nor deserved, it was still job done in terms of securing decent points. With one round to go, Callum moves closer to the coveted IAME Euro Series title in Senior X30.