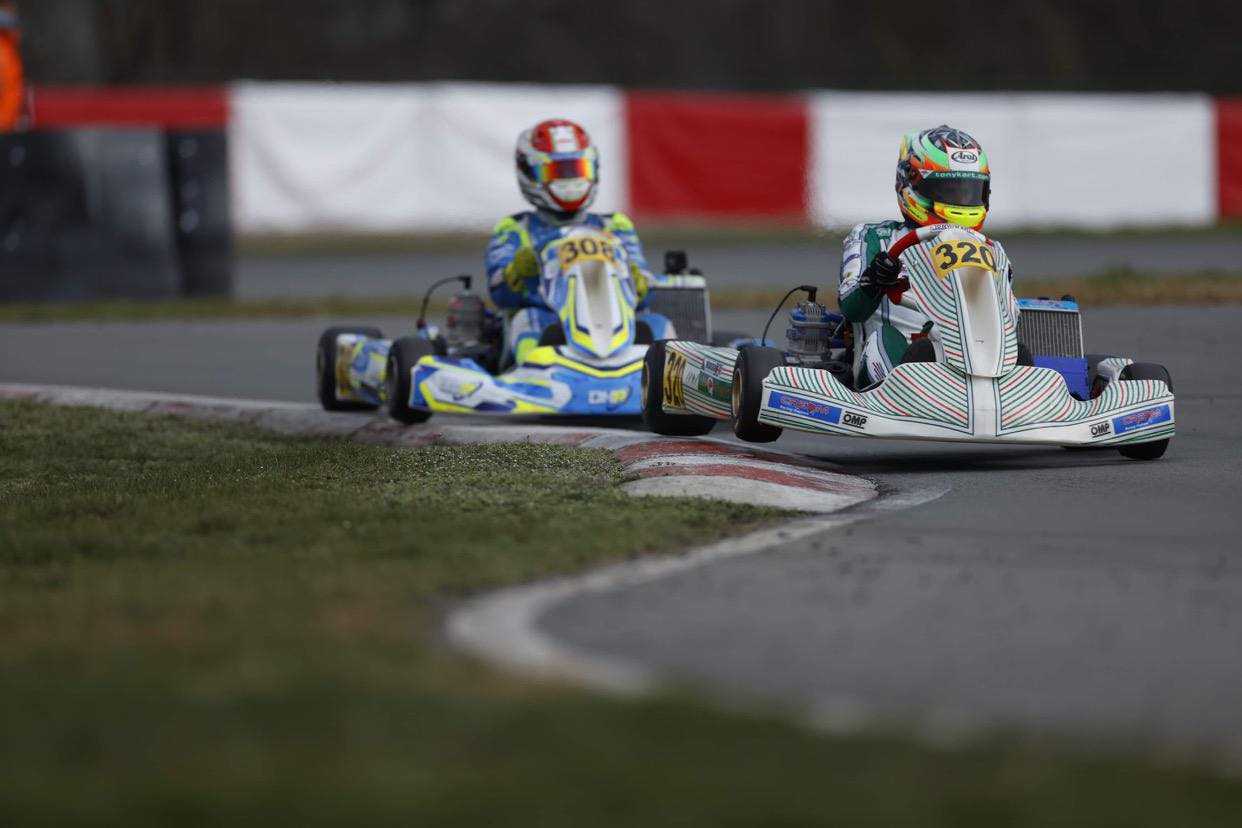 Callum Bradshaw made his return to the IAME Euro Series last weekend to represent the Tony Kart factory with Strawberry Racing. Callum was sent to Mariembourg to return to the series he is the reigning Vice Champion in and help put the chassis firmly at the top of the field. Strengthening Strawberry’s line up he would help do just that after taking a commanding victory in the Pre-Final followed by a 3rd place on the road in the final.

Callum picked up from where he left off as soon as he hit the track at Mariembourg. Sent by the Tony Kart Factory Team, Callum knew he had a high standard to adhere too and he did that straight from the off.

After topping the times in practice, Callum would go quickest in his qualifying group which would leave him 3rd overall. Having quickly adapted back to the X30 engines, Callum’s World Championship winning race craft was demonstrated on Friday and Saturday as he took three heat wins with a 2nd and 3rd in the other races.

The results put him on the front row for the Pre-Final alongside teammate Mark Kimber. It was a perfect result for the team and for Callum it was half of the mission for the weekend completed.

As the Pre-Final got underway Callum held his own around the outside to stay in 2nd and was very quickly into the lead after putting a move on Kimber. From there, Cal would never been seen again as he quickly put some distance between himself and the chasing pack and would go on to take a comfortable victory.

After a clean start to the final Callum would lead the field onto lap two, which is where the trouble for the Tony Kart driver would begin. Enzo Leveque would push Callum wide going into the hairpin which would see the Brit drop to 3rd place. Things would go from bad to worse from Callum after he was pushed down to 5th on lap seven.

After quickly getting back to 4th Callum would set after 3rd and would pass Ollie Greenall on lap twelve at the hairpin. Now back into the podium positions Callum was left with a gap of 2.8 seconds to chase and just six laps to close it in.

Now on fire Callum was taking a few tenths out of the leaders on every lap to leave himself just over a second behind the top two with two laps to go. As the penultimate lap struck, Callum’s pace went up even further and as the leaders started to fight Callum closed the gap putting him right on their tail going onto the final lap.

After taking 2nd going into turn one from Enzo Leveque it was one down and one to go for Cal. As his teammate Aaron Walker over-defended, a wide line from Callum would see him get the run around the outside and power his way through into the lead of the race. With Leveque now behind there would be a repeat of lap two with the Frenchman pushing Callum wide and out of the lead of the race.

The incident would sadly lead to further contact dropping Cal to an eventually 3rd which would become 9th post-race with a front fairing penalty. A huge shame, given he’d raced fairly all weekend but a World title can often put a target on the back of your race suit and that was demonstrated in Mariembourg this weekend.