Callum off to winning start in British Kart Championships 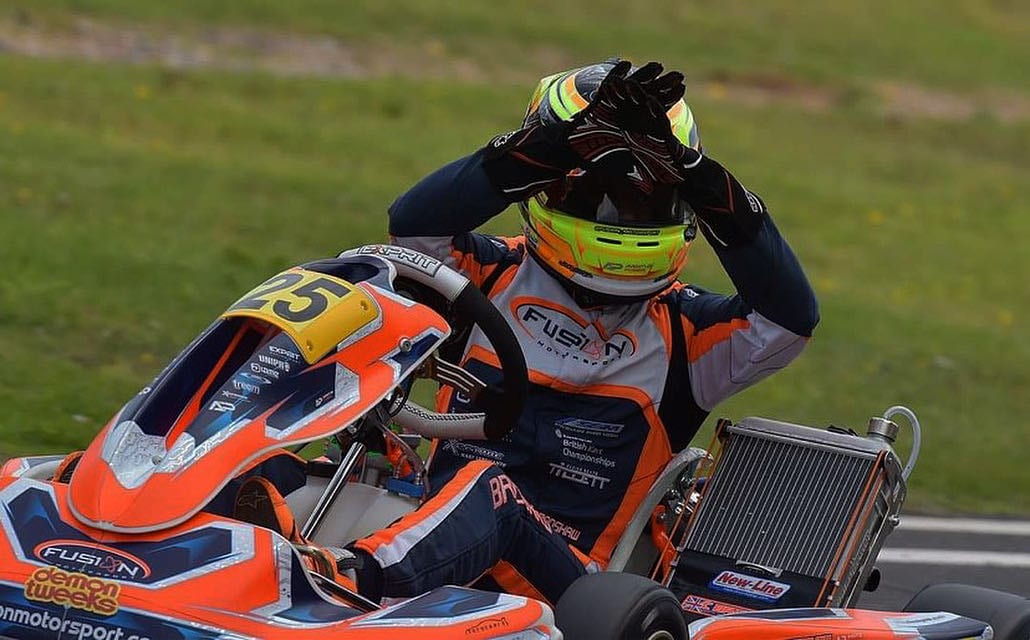 It was another successful championship start for Callum Bradshaw in 2020 as he took victory in the opening race of the season at Rowrah before finishing 2nd on Sunday’s final. The Fusion Motorsport driver now leads the championship in the poster class of this year’s British Championships which includes seven seeded drivers.

It could be said that Callum is in the form of his life in 2020! In his handful of appearances on track Callum has dominated at both the Ultimate Karting Championships and IAME Euro Series with two wins and a 2nd place finish in just three races. Now racing for the fifth time Callum was looking for more of the same and delivered to the incredibly high expectations many would now have for him.

Saturday would see Callum off to a solid start with a win in his first heat helping him qualify on the inside of row two for the first final of the season. Although Callum would take advantage of that inside row start to jump into 2nd he would quickly be demoted down to 4th in the early stages of the race.

Callum, seeing danger behind, would put himself straight back up to 3rd and settled into the middle of a quintet all fighting for the lead. As the race entered the second half Callum began to make his moves first picking off Gus Lawrence for 2nd before passing Danny Keirle for the lead.

Once at the front Callum really took control of the race despite the constant pressure from behind. Setting fast and consistent times, Cal would only need to defend at times and his textbook driving saw him pushing the pressure onto Oliver Hodgson in 2nd. Heading onto the last lap Cal would not need to go too defensive and was able to take the racing line through the final corner to take the first victory of the season!

A brilliant performance, but Callum knew celebrations would be short lived as he would be back out on track the next day to do it all again.

With the season now officially underway overnight Callum became the driver to beat. Cal would continue the trend of being first across the line with a perfect run on Sunday qualifying on pole position and taking both heat wins to put himself on pole for the final. The result scored him another 65 points in the championship which extended his lead out front.

Sunday’s final would see a similar start with Callum put under pressure in the early stages after being forced back from 2nd to 4th on lap four all helping Keirle build a gap out front. As Callum attempted to work his way back through he came across a reluctant Connor Jupp who would fight back leaving the two leaders to build a gap out front.

However, staying patient Callum would work with Jupp  with the pair eventually rewarded as they would turn a lead duo into a lead quartet heading into the final few laps of the race. Being at the back of the group around a very narrow Rowrah circuit put Callum in a tough position when it came to making moves, but he waited for his opportunity to arrive on the final lap where Jupp and Hodgson would both run wide at hairpin two whilst fighting for 2nd leaving Callum to come through and pick up the pieces.

Although too late to take the fight to Keirle a 2nd place would be a great result for Callum and would leave him in the lead of the championship leaving the first round. Overall it was yet another brilliant weekend for Callum who’s trophy cabinet is growing at a rapid rate in 2020 and he has quickly become the driver everyone is talking about in Senior X30.