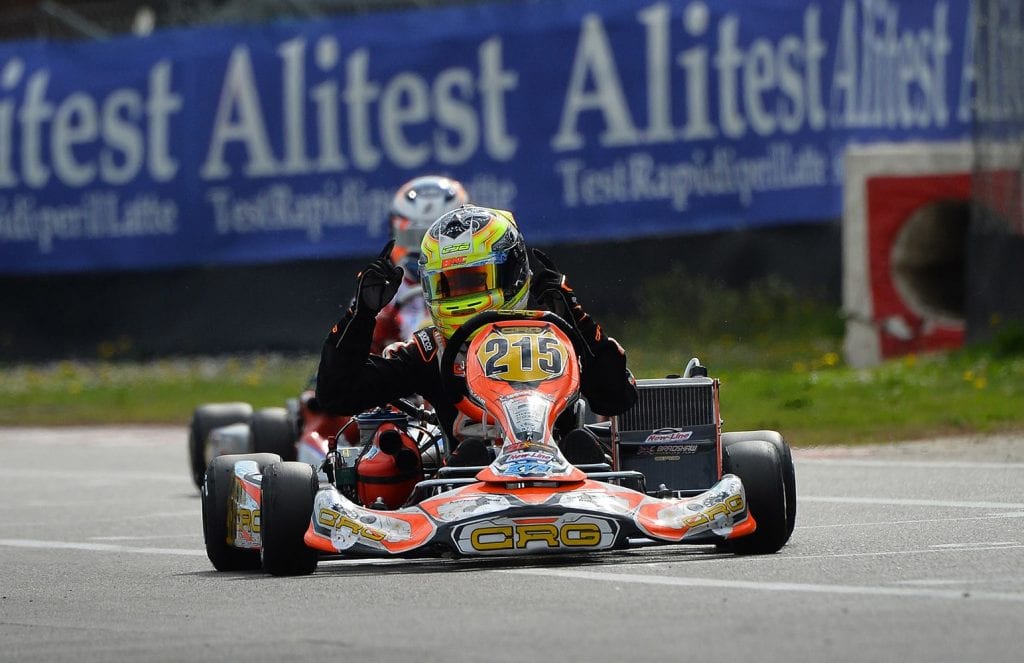 In the second part of my top five career highlights I will head back to 2017 and a momentous moment which saw my take my first major victory since signing to the CRG Factory Team at the start of the year. It followed on from a fantastic 2016 and saw me show my capabilities against the World’s best in the OK class. Enjoy!

Just weeks after he had signed to the World famous CRG Factory Team, Callum put himself onto the top step in one of the most historic Karting events in Italy, the Trofeo Andrea Margutti. It was the 28th running of the race meeting which saw Callum firmly place his himself, not only in the team, but also in the paddock as he beat off podium finishers from the 2016 World and European championships, Felice Tiene and Tom Joyner.

Joining the CRG Factory Team, Callum knew he had big shoes to fill following in the footsteps of Motorsport legends Lewis Hamilton, Michal Schumacher, Nico Rosberg, Max Verstappen, Robert Kubica and Alex Zanardi. For the first time in his career the sticker kits on his kart carried a huge weight of expectation with more eyes on him than ever.

Coming into the event Callum had been on a tough run in the WSK Super Master Series where he felt the full force of racing at this level in the senior class. However, his debut in the 22nd Winter Cup had been a success with Callum finishing 21st place in the final. A strong effort, given the size and quality of the field.

Now back at the same circuit a month later Callum was here to turn his fast lap times into a podium. Right from the off Callum was topping the times in practice and followed that up with a 5th place in qualifying. He converted that into two solid results in the heats to leave him 3rd on the grid in the Pre-Final.

Despite his inexperience at this level Callum showed experience beyond his years to catch race leader, Lorenzo Travisanutto and pounce on the penultimate lap to secure the win and pole positon for the final.

The grand final would see Callum put to the test with Travisanutto in his tracks for the entire 22 laps. Although Callum could pull a half a second gap he was unable to break clear from the Italian and could afford no mistakes going into the final few laps. Given he was just a handful of races into his career with CRG in the OK class, it was hugely impressive to even be in this position. Then, just weeks away from the start of the FIA Karting European Championships, Callum won the 28th Trofeo Andrea Margutti!

Callum would be the eighteenth different Brit to win the event joining the likes of Will Stevens, James Calado and Jack Hawksworth. His name would now be amongst some F1 stars who had previously won the title including Esteban Ocon, Daniil Kvyat, Lance Stroll, Sebastian Buemi and Robert Kubica.

“Winning the Andrea Margutti Trophy was a hugely special moment for me! It came off the back of a couple of months of hard work with CRG and would lead into two brilliant years with the factory racing at the highest level of Karting. Getting to that level in the sport was always a dream of mine and I’d like to thank everyone at CRG for putting their belief in me and for all their hard work over the 2017/18 seasons. I will always treasure those seasons and I’m glad we were able to stand on the top step together at one of the biggest Karting events.”